Experience the real Star Wars adventure by wearing the superheroes inspired jackets. All the outfits are made from real leather and high-quality fabric that will furnish your appearance and last longer than the ordinary ones. You can explore here Han Solo Jackets, Finn's vest, Jyn Erso jackets, etc. Pick yours Star Wars clothing and start the journey. 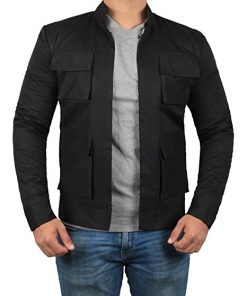 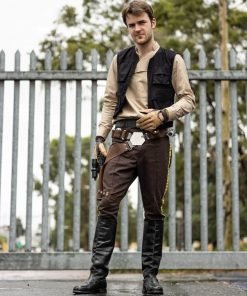 Star Wars is a movie franchise that has roots in the movie industry since its first movie released in the year 1977 and has been a tremendous achievement since then. There have been seven movie releases in the Star Wars franchise, and the audience has supported them because of their interesting movie plots and staggering performances. Another factor that made these movies a huge success is the outfits of the characters. The outfits of the film characters were skillfully crafted in accordance with the characters that suited them best.

This mega collection of Star Wars inspired clothing includes Star Wars hoodies, jackets, t-shirts, coats, waistcoats, and vests. Various characters in this movie have worn astonishing attires that are worth praising due to the excellent design and appearance. May it be Luke Skywalker or Princess Leia, irrespective of the gender every attire has its own characteristics and features that make them appealing to the viewers. The star wars jacket collection is inspired by various characters, which include Finn, Luke Skywalker, Han Solo, Jyn Erso, Princess Leia, Darth Vader, and star wars inspired dresses.

What kind of jacket does Han Solo wear?

Han solo wears many kinds of jackets including black cotton jacket, leather jacket, vest and parka coats in different scenes and the series of Star Wars.

What color is Han Solo’s vest?

Han Solo vest is in Black color which is made from real leather that can be wear over any dress.

Which material do you use to create Finn’s vest?

Finn’s vest and other Star Wars jackets are made from high-quality real leather such as cowhide, goatskin, lambskin, etc.

How many colors are available for the Han Solo Suede leather jacket?

Our Han Solo suede leather jacket is available in light brown and dark brown color, both are the exact same in design, quality, and features except the color.

Are the jackets are the same as the display?

FanJackets is the leading company and provides screen accurate jackets and outfits. You can feel slightly color change due to the setting of the monitor/LCD screen.